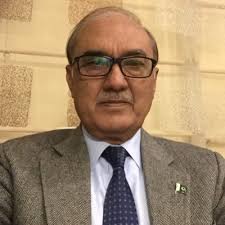 Lt Gen (Retd) Naeem Khalid Lodhi (Defense Analyst): Some foreign hands have been involved in promoting terrorism in the Pakistan. The credit for the achievement goes to the security forces and the Pakistani nation as well. Our security forces launched a comprehensive operation against foreign and local terrorists who were hiding in sanctuaries in North Waziristan tribal region. The defenders of Pakistan initiated the operation with unflinching faith and undaunted commitment to eradicate the scourge of terrorism. Undoubtedly, it was an uphill task to fight in the most treacherous terrain but Pakistan armed forces proved its invincibility with an unwavering resolve, as the motherland’ peace and progress has always remained paramount for Pakistan Armed forces. Now Pakistan is fencing Pak-Afghan border to stop the cross-border movement of the terrorists. We must be thankful to Allah Almighty that Pakistan is being considered as a peaceful country and our people have sacrificed precious lives to get this milestone.