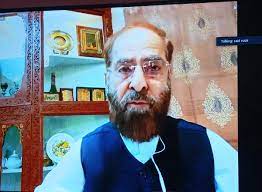 Brig. (Retd.) Said Nazir (Defense Analyst): We have witnessed rapid shifts in the political situation of Afghanistan in recent months. The Kabul government is habitual of playing blame games to hide its failures in governing the country. Pakistan has played a proactive role to facilitate the Afghan peace process. The world has acknowledged Islamabad's efforts for regional peace. It is appreciable that global powers are making collective efforts for Afghan peace. The hasty withdrawal of the US troops would risk the security situation in Afghanistan. It is responsibility of the United States to ensure political and security stability in Afghanistan before complete withdrawal. Taliban are not in the favor of civil war.