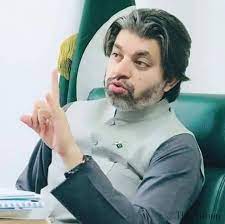 Ali Muhammad Khan (Minister of State for Parliamentary Affairs): Pakistan has always emphasized the need to resolve Afghan dispute through dialogue. The world is repeating the same mistake again as far as the Afghan issue is concerned. The global powers must deal with the issue sensibly. Peace cannot be achieved through war or use of force. The Prime Minister Imran Khan has called upon the world community to come forward and assist Taliban to rebuild Afghanistan. The global powers have a responsibility to take concrete steps for Afghan peace. Pakistan has always offered its sincere facilitation to resolve the Afghan dispute. The world must realize that Pakistan has already rendered matchless sacrifices for global peace. We also opened our hearts and borders for Afghan refugees. We want the world to realize that only an Afghan-led and Afghan owned peace process is the ultimate solution to the Afghan conflict. Afghanistan belongs to people of Afghanistan. China and Pakistan have categorically stated that they want good ties with the Taliban government.